Hosted by ACRES, the Asia for Animals Conference (AFA), which took place in Singapore on 13-17 January 2014, brought together numerous animal welfare organisations in Asia. It provided a platform for networking opportunities as well as discussions of pertinent issues. I was extremely pleased to be a part of it.

I had the invaluable opportunity to meet many like-minded individuals from the different animal welfare groups out there. Like Project LUWAK SG, their main mission is to push for the humane treatment and protection of animals. Elephants (ivory) and sharks (sharks’ fin) are regularly featured in the news. Battles to put an end to the senseless trades continue to be waged, lost and sometimes won. Although the kopi luwak trade was not strongly featured during AFA, several lessons could be drawn from efforts to tackle similar trades.

A representative from the International Fund for Animal Welfare (IFAW) explained that ivory, as with many other products implicated in the wildlife trade, remains a coveted item by wealthy families. Efforts taken by IFAW include urging online shopping websites such as Tao Bao to implement zero tolerance policies to ivory trade. Emphasis was also placed on the importance of strengthening policies, enhancing enforcement and stigmatizing the possession of ivory by destroying existing stocks or seized shipments. Such steps have been taken in China and Hong Kong.

Several success stories provide testament to the unwavering perseverance of animal activists. Public awareness campaigns led by shark conservation groups, animal welfare activists and the alike, led to governments in China and Hong Kong announcing a ban of shark fin soup in official state banquets. On top of that, many hotels, airline companies and restaurants have also responded positively by removing shark fin soup off their menu. In Singapore, supermarkets such as Cold Storage and NTUC Fairprice have removed shark fin products off their shelves in recent years. Shark conservation groups such as Shark Savers continues to work with local celebrities to endorse their campaign ‘I’m FINished with Fins“.

Gladys and I also took the opportunity to introduce Project LUWAK SG through our newly printed decals, designed by Sharon Bong and sponsored by SKL0. 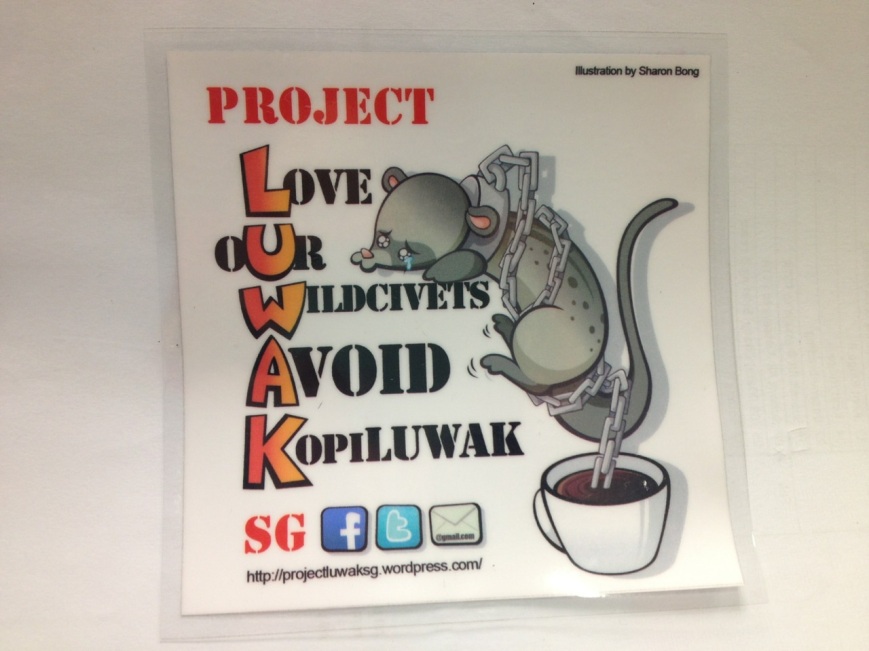 To our delight, our stack of decals was gone by the end of the day! We also managed to speak to several conference delegates about Project LUWAK SG. Hopefully more people will learn about us and most importantly, about the cruelty behind the production of kopi luwak from caged civets.

Please help us to spread the word and get more people to pledge to not support the trade in any way. Every person counts! Learn more at https://projectluwaksg.wordpress.com/support/.